Well, I’m back. With a little reluctance, but mostly just a buzz of post-adventure relaxation after a long weekend spent in northern Thailand. We had Monday and Tuesday off this week, which had the happy side effect of allowing me more time to travel, but more importantly, was the celebration of two Theravada Buddhist holidays: Asalha Puja and the beginning of Vassa. I’ve enjoyed learning and reading more about Buddhism during my time here, so here is my brief attempt at summarizing these important days. BRIEF!

Asalha Puja Day celebrates Buddha’s first sermon after enlightenment, in which he set out the Four Noble Truths and the Eightfold Path. The core, fundamental teachings of all schools and traditions of Buddhism are based on these central beliefs and doctrine. In Theravada Buddhism, Asalha Puja Day is followed by the beginning of Vassa, a three-month annual retreat that takes place during the rainy season. During Vassa, monks enter a period of intense meditation and focus – the three months is often described to Westerners as “Buddhist Lent”, because practicing Buddhists will often treat this period as one of asceticism, giving up meat, alcohol, etc. 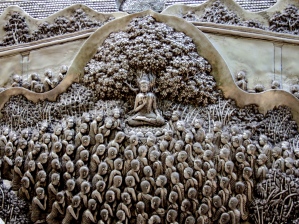 Just so happened to come across this engraving on a temple wall while wandering through Chiang Mai; a depiction of Buddha’s first sermon.

In Suphanburi, Asalha Puja Day and the beginning of Vassa was celebrated with a big parade through the city, carrying floats of offerings and candles for the monks, and ending at one of the temples. I’ll be getting the report from my students tomorrow! I’m sure it was lovely.

However, I was headed up north. First, I flew to Chiang Mai, which is Thailand’s second largest city, a university town, that feels to me like a wonderful mashup of Austin, Texas and Ayutthaya, Thailand. Chiang Mai buzzes with students and expats, markets and motorbikes, and is surrounded by lush mountains (Thai mountains, mind you – so hills, really). The “old city” is all inside a still-standing wall (and moat!) that was originally built to keep out the invading Burmese in the 13th century.  Sitting in an open-air jazz club on Saturday night, my casual view included a big piece of this crumbling edifice. What a perfect convergence of old and new.

Enjoying a Guinness in Chiang Mai. First dark beer in Thailand, and it was ohsogood.

Chiang Mai was not our ultimate destination, though — it was a meeting point. After joining forces with three fellow teachers who live in the North (Tricia, Sean, and Kristen), we were off to Pai, a tiny (population: 3000) town in northeastern Thailand. Pai (pronounced “Bye”) is a 3-4 hour drive from Chiang Mai — on a very windy, mountain road. The road itself has a reputation due to its (alleged) 72 curves and propensity for making travelers ill. But when we stopped for a coconut/watermelon/papaya shake break at our halfway point, I was wondering what all the fuss was about! We either have stomachs of steel or had a good driver (yes, I realize that’s the more likely option) because we were all feeling great and couldn’t believe our eyes at the gorgeous forests and verdant valleys we were driving through.

Fruit shake break on the road to Pai. So far in this post, all I do is consume beverages.

Pai has been on my to-do list because it’s known as a laid-back, outdoorsy, picturesque little town. The hippie backpacker set is putting this place on the map — so as a part-time backpacker / full-time lover of organic things and yoga, it was almost ridiculously easy to fall in love with Pai.

So much love in Pai.

The four of us stayed at the (well-hidden — in fact, almost nearly impossible to find) Pai My Guest Resort.  And we were the only people there!! Well, it was the four of us and Mr. Pai’s son, a 16 year-old who was left in charge of the place and made us breakfasts of heart shaped eggs and sausages. Unbelievable. The heart-shaped breakfast was served (on a veranda, next to a rice paddy and a mountain) on our first morning and we collectively asked each other, “What is this place? How much more lovely could this possibly be?” And then two butterflies appeared, looping around each other and flittering around across our breakfast table. See? Ridiculous. 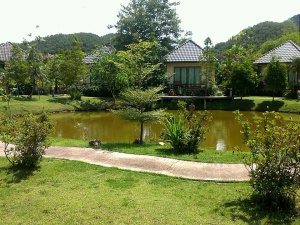 Pai My Guest Resort. Exclusively ours!

After breakfast, we set out for adventures in Pai. This required, first, the rental of motorbikes — which, for 140 Baht a day, is really the best way to get around. Hair in the breeze (yes, under a helmet, Mom!), fresh mountain air, and views for days.  My northern Thailand teacher friends all drive motorbikes to school, and I just take my two feet, so Tricia graciously zipped me around Pai all day on the back of her motorbike. It was awesome. We swam in waterfalls, hiked along the rim of Pai Canyon, had coffee with a valley view, ate burgers and avocado sandwiches for lunch (AVOCADO! OH MY GOD I’VE MISSED YOU!), and finished the day with a hot springs soak under pleasantly overcast skies. 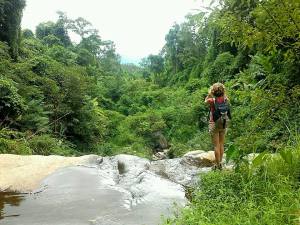 Waterfall view. Doesn’t get much greener than this. 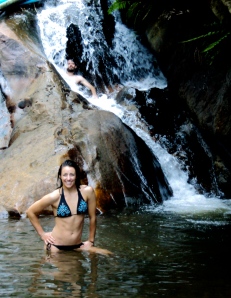 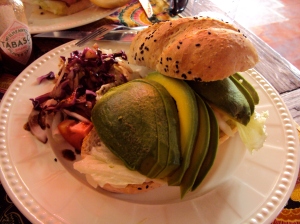 A picture of lunch is required when you haven’t had avocado in three months and it’s your FAVORITE.

At “Coffee in Love.” Best view in Pai.

Pai Canyon hike – the first time Thailand has reminded me of Colorado!

Rain moving into the valley in the late afternoon. 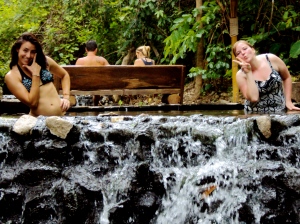 Silly girls in the hot springs. (No steam, since it’s already warm/humid out, but they were definitely hot – about 35 degrees Celsius!) 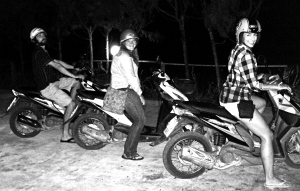 We also ate delicious pizza in a candle-lit restaurant (after the power went out) and did yoga on our porch in the morning looking out over the serene rice paddies. We stopped on our hike and listened to nothing. No traffic, no voices, no dog barks, no air conditioner hum, no horns on tuk-tuks or songtauws or buses. Perfect.

So the weekend in Chiang Mai and Pai was, undoubtedly, a success. Good food, good people, great adventures. If you can, you should get to Pai soon – before the Lonely Planet throngs officially turn it into the Khao San Road of the North. But I loved getting out and seeing more of this diverse country I live in – and I never quite realized how much I missed mountains until this weekend.

So Pai, my heart may be in Thailand, but I think it still belongs to Colorado. But you still have the best coconut shakes.