I’ve always loved the Fourth of July because you can really dig your heels into summer. It’s still early enough that those long, lovely days spread out in front of you with only the tiniest whisper of a worry that they’ll go too fast.  In early July, there’s still ample supply left. And Fourth of July activities are right up my alley — soaking up sun, listening to music, hanging out in backyards and parks with grills and beer in cans. It’s just such a pleasurable holiday.

But Thursday came and went without much thought or fanfare here in my little corner of Thailand. I taught my classes, did my laundry, ate dinner. Wished my fellow teachers “Happy Fourth of July!” and was a teensy bit homesick.

So what’s a girl in Suphanburi to do with this reservoir of nostalgia for hot dogs and the red white and blue?

Get herself to Bangkok for an Independence Day celebration! 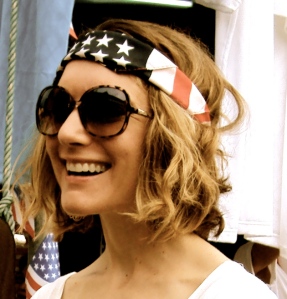 Clearly in the mood for Americana!

Friends of friends (also teachers) invited us to a party at an International School in Bangkok hosted by the American Chamber of Commerce. Caitlin, Cash and I hopped on a bus and arrived in Bangkok around noon on Saturday, a warm but gloriously rainy/overcast day. In Colorado I seek out the sunshine; in Thailand I appreciate any variance from the normal tropical weather trifecta of HOT SUNNY HUMID. (I just realized that the word “humid” even sounds like what it is. Just saying it requires a thick burst of air that stops muddily at the letters of “m” and “d”. Exactly like the feeling of sliding open the door of our office and stepping into the hallway at school — into a wall of dense, drippy heat.)

I know — enough on the weather! Back to the Fourth of July.

We arrived in an expansive, beautifully landscaped school compound to a BIG party, full of tents and families, complete with live bands, a mechanical bull (Yeeeehaw!), tacos, guacamole, all kinds of barbecue, free dairy queen cones, tug-o-war and pie eating contests, microbrews (Yaaahooo!), and a lovely (though quite loud) man dressed as Uncle Sam. And lots of Americans! It’s not til I am around lots of folks like me that I realize how much we really must stand out in Suphanburi. And sometimes, it’s just nice to blend in and not think about whether I’ll run into my students while I’m wearing running shorts or some other non-teacher-y apparel. (Ahem. See below.)

The party was DELIGHTFUL.

Caitlin about to SLAM on a pulled pork sandwich.

Up next, mechanical bull riding: (Because who DOESN’T want to ride a bull immediately after eating an enormous hunk of meat?) 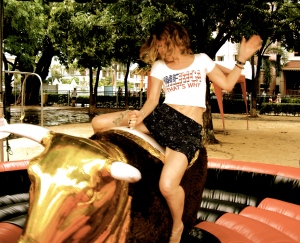 A few seconds later I went flying off in a not-so-graceful but totally hilarious tumble. 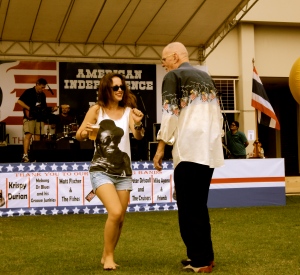 Caitlin does a little two step with an American fellow.

And FINALLY, I caught up with Barack and Michelle.

This shirt was 100 Baht. But really, it’s priceless.

The Marines from the American Embassy also did a flag presentation, and when we all came together to sing the national anthem, I was touched to see an older veteran standing in front of us saluting the flag. The day was exactly what I needed to fill that little America-shaped gap in my day-to-day life. A reminder of how nice it is to have a shared sense of home and identity when we’re all half a world away.

And my pulled pork sandwich and Lagunitas IPA? Nothing short of amazing.