In week three of teaching, I’ve figured out that my students know ABOUT as much English as I know Thai. It’s basically an even playing field.

In summary, I know how to confidently say:

“Green curry with chicken and rice, please,” and

And my students know how to confidently say:

Therefore, I need to either learn some Justin Bieber songs, or learn some more Thai. Choice number two, please! I’m committing myself to practicing for 30 minutes a day, at least. I have ample time in between classes, so there’s no excuse not to! However, in the interim, I am constantly charmed/entertained/bewildered by my communications with Thai teachers and students. Language is distilled down to the bare essentials, and pronunciation and vocabulary usage are total wild cards. 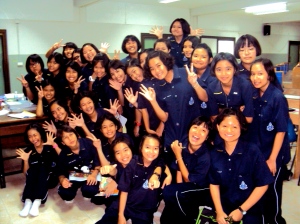 Most surprising use of the word “bawling”:

On Wednesday, Caitlin, Cash and I were talking with one of the other Thai teachers in the Foreign Language Department, Miew. She’s the youngest of the other teachers, very welcoming and nice, and quite pretty. Her English is quite good. She was explaining to us that she was once a student at Sanguan Ying School, and then she “had” to come back and teach here. It sounded like she would rather have spread her wings a little bit, but she said this with a smile and a pleasant tone, regardless. She said to the three of us, “Yes, I was a little bit bawling when I came back to teach here, but it was okay. But then I was DOUBLE bawling because I was no longer the most beautiful, since you are here!” This was so sincere, and so inadvertently adorable.

[A note on “beautiful” — this really seems to be the highest/most used compliment here, and it is used particularly in reference to Westerners, and even more with those who have lighter skin. Every single skin lotion or cleanser or sunscreen has “whitening” ingredients in it. I don’t know what chemicals are in there, but everyone is slathering them on. There is much more to be said about this; I know there is a layered confluence of reasons for it, not the least of which is the pervasive influence that “Western” media and its cultural constructs of beauty have on developing (and developed!) countries. That also helps explain Justin Bieber. But I’ll save the sociopolitical commentary for another time.]

Best verbal throwback to 1992, courtesy of one of my students, Ping:

I was in one of my classrooms (Room 303, I believe — I remember this one because the word “perfume” was accidentally written on the white board in permanent marker, next to a hand drawn picture of a frog.)  I’m standing behind the little desk, organizing my notebook, water bottle and dry erase markers. The students are milling around, chatting, laughing, causing the happy ruckus they are able to flawlessly recreate every 50 minutes.

Ping is my class clown. But she sits close to my desk, so it’s easy to keep her in check, and the funny kids are always super bright (as in most of life!). I turn to write today’s lesson, ordinal numbers, on the board, and hear, “Yo!”  It doesn’t stand out amidst the chaos in the room, until I hear it again: “YO!! Teachaaa Annie!!”  I turn around. It’s Ping, sitting at her desk. She’s just smiling like crazy, and again says, “YO!!! Teacher!!! YO!!”  I can’t help but crack up. Someone obviously taught Ping this, and she’s REALLY proud of it. She has no idea she sounds like an American teenage boy in the early 90’s. I love it. I can only IMAGINE what my colloquialisms sound like to my Thai students. I’m sure it’s at least part of the reason they’re giggling all the time.

I’ve started asking my students to translate a few words for me, so I can start learning more Thai vocabulary. I’ve been explaining to them where I’m from, that it’s very cold in Colorado (comparatively, anyway!) and there is snow. So I’ve acted out “cold” (hugging my arms, shivering), and they would say, in unison: “Naaooooww” with a rising tone. Like the response you’d get if you asked a despondent thirteeen year-old to take the trash out. “Noooowww??” Awesome, I thought. Got it. Naow = cold, in Thai.

Then I’d say, “…and there is SNOW…” and I’d make a fluttering motion with my hands coming down from the sky.  Again, they responded in unison, “Funnntoww”, with a rising tone. All 19 classes responded “Funtowww.”  Sweet, I thought. Got it – another word! Funtow = snow. So today, when we were reviewing where I’m from, I wrote: “snow = funtow” on the board. The class immediately went into a frenzy. “No, no, teacher!! Funntoww is rain!”

Of course! So obvious, Annie! In Thailand, cold = rain, NEVER snow. So I looked it up. Snow is “Heemaw.”  Just in case you wanted to know. Though you probably won’t need it!

It’s been an entertaining and exhausting week. And never boring! My mom always said to us growing up, “If you’re bored, you’re not being creative enough.” Well, mission accomplished, kids of Sanguan Ying School.

But for now, that’s enough mental gymnastics. It’s time for some yoga.

One thought on “…and then I was DOUBLE bawling! (Misadventures in language.)”