In Thailand, sanook (fun) is a pretty high priority. In fact, it may be the second highest priority, after … smiling. So, with two weeks of teaching under my belt, it was time for some sanook on the island of Koh Samet. Last Friday was a holiday in Thailand, Visakha Bucha Day, which celebrates the birth, enlightenment, and passing away of the Buddha — and it also meant we had Friday off, and a little extra time to travel.

I left Suphanburi on Thursday afternoon after teaching three classes, and about 7 hours later (2 hour minibus + 45 minute Skytrain + 3.5 hour minibus), I met up with a bunch of fellow teachers in Ban Phe, a port city on the Gulf of Thailand. We crashed at Ban Phe Hostel on Thursday night, and then we caught the first ferry to Koh Samet in the morning. Koh Samet is the closest island to Bangkok, perfect for a quick (ish) getaway.

Observation: I’ve noticed my tolerance for travel time has gotten much higher since moving to Thailand. Quick weekend getaway to Koh Samet = 6-8 hours of travel time!?! No problem. 5-hour day trip to Erawan waterfalls?!? Sure! 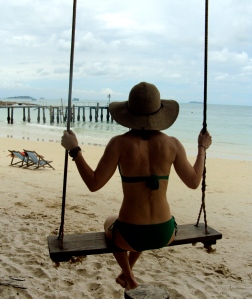 Koh Samet has a laid-back vibe – though it is developed, it’s not really an international beach resort, so it was full of vacationing Thai people and a few backpacker types. I loved it. But it was BUSY on Koh Samet. Lonely Planet and our (rather cursory) Google-ing said to just book a room on arrival. Don’t follow this advice on a holiday weekend OR on a full moon weekend! We had both. Not knowing this, we arrived on Friday morning excited to rent a bungalow and park ourselves on the beach as quickly as humanly possible.

But first, we needed to find a place to sleep. Backpacks on, sunburns in progress, we hiked down the east side of Koh Samet from white sand beach to white sand beach, looking for rooms. It was picturesque, but I know the five of us (me, Rose, Aubin, Krista, and Rachel) were starting to get a little worried as the day went on.  Almost every hotel/hostel/bungalow was either: full, very sketchy, or very expensive. Lesson learned here – we will book ahead next time! As it turned out, and this happens time and time again in Thailand, good luck materialized just when we needed it. We found a lovely hotelier who offered to let all five (ahem, six!) of us stay in a luxurious double room. Rose deftly handled the negotiations. AND the hotel staff brought in three extra beds for us. So after a sweaty, somewhat stressed afternoon (hiking through paradise – I know, cry me a river!) we found ourselves swimming in an infinity-edge pool at our hotel, drinking Changs, and jumping into the impossibly warm, clear ocean.

And that’s pretty much what we did for two days. Swam, jumped off piers, ate breakfast/lunch/dinner on the beach. The ocean was filled with tiny jellyfish – but of course, being Thai jellyfish, they didn’t sting or do anything that was otherwise offensive. They just floated around. It was like swimming in a giant glass of bubble tea.

Sunday was a long journey home after a late night on Saturday night. (Full moon party, karaoke jams, firedancers, dancing, nightswimming, check!) I left our hotel at 9:30 a.m. and got home at 6:30 p.m. – hungry and tired, but definitely relaxed.

Home. I realized that when the minibus pulled into Suphanburi last night, I had that feeling of contentment that is unique to coming home – a mix of equal parts happiness, relief, and comfort knowing that I was back on my tiny little place on the map. The running joke of the weekend was when one of us would look at the others and say, “I live here! I live in Thailand!” with a deadpan tone of delight and disbelief, as we lounged on one of the most beautiful beaches in the world.  So far, we’ve mostly felt like tourists, lucky participants in an extended adventure. But after arriving back in Suphanburi last night, I felt like I was coming home. And more importantly, I think I’m actually starting to believe it.